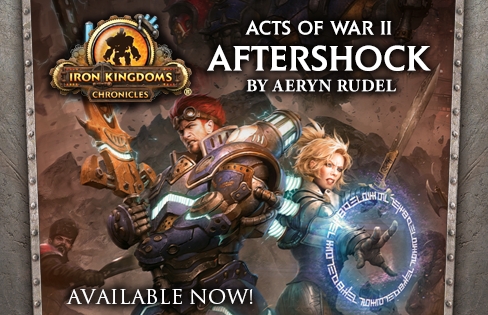 Last week, we discussed the first novel I wrote for Privateer Press, so now we’re going to discuss the second. Acts of War: Aftershock is the direct sequel to Acts of War: Flashpoint, and, you guessed it, the second book in the Acts of War trilogy. This is without doubt my favorite of the novels I’ve written for Privateer. Before we get into why, check out this bad-ass cover by Néstor Ossandón. (Seriously, folk, check him out. His stuff is ridiculously good.)

War Has Come Again to Llael

On the heels of inflicting defeat on the Khadorans at Riversmet, Lord General Coleman Stryker marches deep into enemy territory for a major assault. But he is unprepared for a massive Khadoran counterstrike. Empress Ayn Vanar and Supreme Kommandant Irusk send their nation’s most fearsome warcasters to retaliate against the invaders. Hope comes in the form of Ashlynn d’Elyse, warcaster and leader of the Llaelese Resistance, a woman with no love for Cygnar but who could make a powerful ally. Along with Asheth Magnus, Stryker’s enemy-turned-ally, this unlikely team must fight on despite being outnumbered, outmaneuvered, and cornered with only their wits and a few warjacks to save their cause from annihilation.

I had so much fun with this one. In the first novel I was finding my footing with the characters, especially Magnus and Stryker, in this one, though, I really got comfortable with my heroes, and I think that comes across on the page (it certainly does in the reviews!). The addition of warcaster, sword master, and Llaelese noble Ashlyn d’Elyse was just icing on the cake. I LOVE this character, and she’s a bit of an archetype for characters I’ve written in my own works. One interesting fact about this book is that I wrote the first draft, all 105,000 words of it in exactly 60 days. That’s the fastest I’ve ever written a first draft. Another interesting fact about this book is that I blogged the entire process of writing the first draft (and beyond), once a week, including snippets of the prose in progress, art, and anecdotes. So, if you have any interest in really getting an in-depth look at my novel-writing progress, well, here you go. 🙂

Questions about this book? Or questions about writing media tie-in, especially for tabletop game companies? Feel free to ask in the comments, and I’ll try to impart what little knowledge I possess. 🙂