I’ve completed week four of the first draft of Acts of War II, and I’m well beyond the one-third mark. Here’s the details on week number four.

Progress: I wrote 11,185 words, completed act one, and ended in the middle of chapter seventeen. I’m pleased with this number, though it should have been closer to 15,000. I was hobbled a bit by my primary computer going down, which cost me about a day of work. Fortunately, I’m very diligent about backing up my work and no progress was lost in the melt down. Despite a bit of adversity, I’m still ahead of schedule and moving right along.

The Best Part: Fish out of water. This week I had the chance to take one of the main characters and put him in a situation where he was out of his element and stripped of what he relies on to achieve success. It gave me the opportunity to make this character think outside the box and draw upon skills he hadn’t used in quite some time. This led to some scenes that were a lot of fun to write and showed this particular character in a different light.

The Hard Part: Pacing. Always an issue in an action novel, and something the writer needs to be aware of from outline to final draft. In a book like Acts of War II, it’s important the story move swiftly and nimbly from one scene to the next and maintain a sense of urgency that is vital to the plot. This week had me examining several previous scenes to see if they were bogging down the story, and I marked a couple for possible revision and even removal in the next draft. That kind of thing will continue as I write the first draft and will absolutely be part of the editorial process when I hand it over to Privateer Press.

Mini Excerpt: This week’s mini excerpt features one of Cygnar’s antagonists from the story, Khadoran warcaster Kommander Andrei Malakov. WARMACHINE players will likely recognize one of Malakov’s signature moves in the excerpt. This week’s concept art comes from the exceptionally talented Andrea Uderzo. 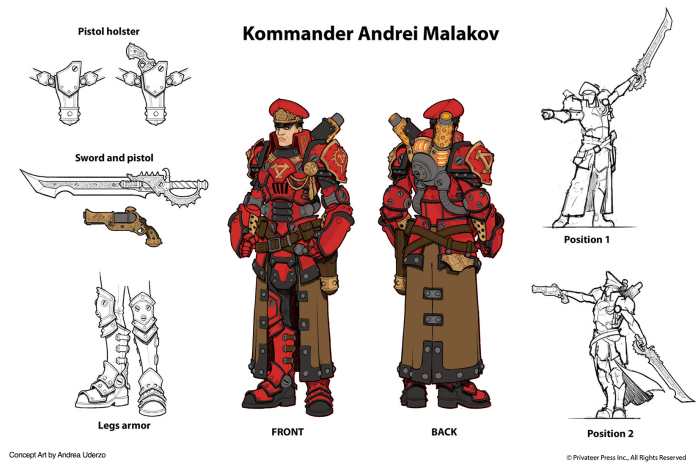 Stryker leveled Quicksilver and fired a blast of voltaic energy, shunting his will into the bolt to increase its lethality.

His attack should have struck Malakov, but the warcaster reacted with almost precognitive speed and pulled a nearby Winter Guard rifleman in front of him, practically yanking the man off his feet. Stryker’s blast hit the unlucky soldier, reducing his head and most of his upper torso to ash. Behind what remained of Malakov’s human shield, the Khadoran warcaster was untouched.

Despite what Stryker knew about the man, he was stunned by Malakov’s callous disregard for his own soldiers. In his mind, death was preferable to living with such an act of cowardice.

I think it would be fair to say Malakov’s leadership style isn’t always a great morale booster for his soldiers.

If you have a question or a comment about the book or my writing process, I’d be happy to answer it in the comments section below. And if you’ve missed the progress reports for the previous weeks, you can find them right here:

You can still get the first book in this series, Acts of War: Flashpoint, at a 25% discount from the Skull Island eXpeditions website by entering the code ACTSOFWAR1 at check out.