Week fifteen! Here’s the update on Acts of War: Aftershock.

Progress: I haven’t been idle while waiting for Privateer Press to review the first draft of Acts of War: Aftershock. In fact, I managed to write another 3,000 words in the form of a short story, a prequel of sorts, focusing on one of the secondary character in the novel. More on that soon.

The Best Part: Looking ahead. As I read through the Aftershock manuscript again, I’m getting ideas for the third book in the trilogy, and I’ve begun to jot them down for the eventual discussion with Privateer Press chief creative officer Matthew D. Wilson, publications director Mike Ryan, and the other folks who make all the Skull Island eXpeditions books happen. The third act is always the BIG one, and even though I won’t start writing book three for many months, I can’t help but get excited about the future of the series.

The Hard Part: Uh, looking ahead. Another two-for this week. As I inch closer to the spectacularly gigantic conclusion to the trilogy, my fragile writer brain reels in horror. I mean, it’s got to be cool, it’s got be epic, and it’s got be, you know, good. That’s a lot of pressure, but like every major writing project, you have to approach it in pieces, one day and one word at a time. Taking it in small bite-sized chunks prevents me from seeing the towering monstrosity of the whole project and allows me to keep my sanity, such as it is. I’ve done that with each novel I’ve written, and I don’t expect book three to be different in that regard.

Mini Excerpt: Today’s excerpt focuses on Asheth Magnus and a confrontation with one of the most feared Khadoran warjacks: the Juggernaut. 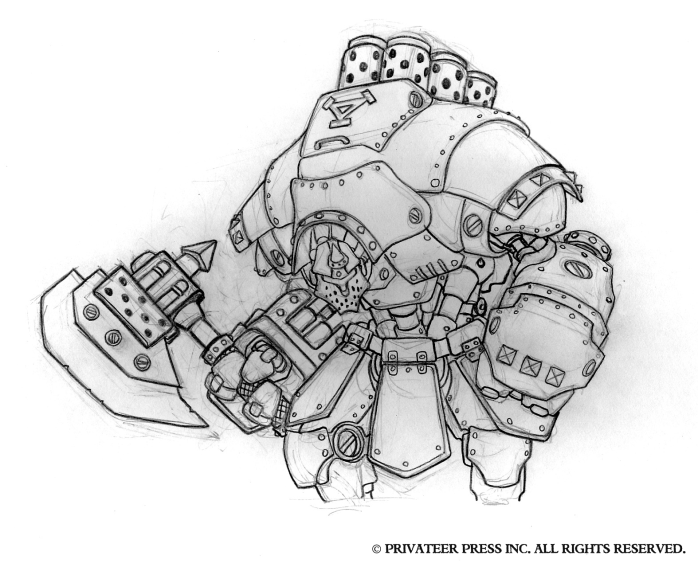 Magnus threw himself flat, dragging Legate di Morray down with him. The shell exploded behind them, and intense heat rolled over Magnus’ back. As he scrambled to his feet, he saw why. The Man-O-War shield cannon had blown a hole in the tower, giving him a clear view of the hellscape below. He pulled di Morray up and pressed him flat against the wall with his mechanikal arm. “Are you injured?” he asked. The legate shook his head, but he looked like he might collapse any minute.

The angle of the doorway ahead offered some cover from the enemy, but it obscured their view of what was inside. To make matters worse, smoke poured from the open door and filled the hall with a black haze. Magnus was more than a little concerned about what that meant. “Did you see what’s in the next room?” he shouted to Horgrum.

The trollkin appeared uninjured, and he stood against the wall a few feet ahead of Legate di Morray. “Three Man-O-War and a warjack with an axe made of ice.”

Come on, Magnus. It’s not all bad news, right? Ice axe, sure, but I’m pretty sure Horgrum would have mentioned the paint job if it was Beast 09. 🙂

Check out the first book in this series, Acts of War: Flashpoint, if you haven’t already. You can still get the e-book at 25% off from the Skull Island eXpeditions website by entering the code ACTSOFWAR1 at checkout.