Week fourteen has come and gone, and here’s your weekly update on Acts of War: Aftershock.

Progress: The first draft is still under review with Privateer Press, but this is not unusual for a couple or reasons. First, it’s a big book that a bunch of folks need to read, and that just takes time. Second, its July release date means there are books in the queue coming out well before it, like Orrin Grey’s Godless, which need editorial attention first. Truth be told, I finished the first draft of Aftershock well before the deadline, which is good for me, but it doesn’t necessarily speed up the editorial process. I still have to wait in line. 🙂

The Best Part: Sword nerdery. Writing this kind of fiction gives me plenty of opportunities to indulge my love of historical warfare. One of the things I like most is figuring out how different Iron Kingdoms weapons might be used in combat. Take Stryker’s mechanikal greatsword Quicksilver, for example. It’s meant to be used by a warcaster to crack open warjacks and other heavily armored targets. Though it can be wielded like a sword, to my mind, its use would often resemble certain types of polearms. On the other hand, Ashlynn d’Eleyse’s weapon Nemesis is a completely different story. She’s a renowned swordsman with a sword designed for dueling, and I can turn to various real-world techniques (from longsword to saber) to describe her fighting style.

The Hard Part: A little goes a long way. The last thing I want to do is turn the book into a treatise on sword-fighting. When I write a fight scene, I go back and read it, specifically looking to see if I’ve gone too far down the rabbit hole with my descriptions. I want to keep the action moving, and I don’t want to drop a paragraph of exposition on archaic fighting techniques into my battle. So, I work to show the techniques rather than just tell you about them. (I get to do the telling in a series of No Quarter articles.)

Mini Excerpt: Today’s excerpt focuses on Lord General Coleman Stryker, who has gotten himself in a bit of a pickle. He’s found himself without his trusty warcaster armor or Quicksilver and must rely on the skills he learned in the Cygnaran Royal Guard years ago. 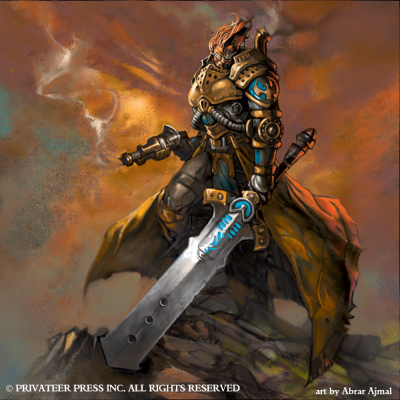 It had been many years since Stryker had used a sword like the one he’d taken from the slain gun mage, but the weapon was similar to the straight double-edged blades of the Royal Guard where he’d received his initial martial training.

The principal guards came back to him in a rush.

He held the sword high, point toward his enemy, and caught an axe blow on the strong of the blade. The heavier axe slid away from his sword, and with a quick twist of wrist and shoulder he opened the Winter Guard’s skull with a powerful overhand cut.

The next Khadoran came at him with a rifle bayonet, thrusting at his stomach.

Stryker turned his sword, point-down, in front of his body and knocked the bayonet away with a sharp parry. He lunged forward, bringing the point of his weapon back up, and used his momentum to ram the blade through the Winter Guard’s throat.

One Comment on “Acts of War: Aftershock – Week 14 Update”