Five weeks have come and gone, and I’m past the halfway point in the first draft of Acts of War II. Before we get started, though, I’m pleased to announce the book now has an official title, Acts of War: Aftershock.

Here’s the skinny on week five:

Progress: I wrote 10,149 words and ended in the middle of chapter twenty-one. I’ve passed the midpoint in the book, and though it’s not exactly downhill from here, it’s a good milestone, and I feel like I’m right where I need to be.

The Best Part: Secret stuff. One of the best parts of writing these books is that I work closely with Privateer Press Chief Creative Officer Matthew D. Wilson and Jason Soles, lead developer for WARMACHINE. I can’t say anything yet, but damn there is some exciting stuff in this book for WARMACHINE players, the kind of thing I want to talk about so bad I can taste it. But, you know, NDAs and all that. Anyway, I will get to reveal some of this cool stuff as the updates go on, so make sure you stay tuned (or even subscribe to the blog).

The Hard Part: Fantasy weapons. I’m a weapons nerd, and I’ve been doing stuff like SCA and HEMA for a long time. In other words, I generally know what a functional sword or axe or whatever is a) supposed to look like and b) how it should be used. With any fantasy setting, realism in melee weapons is not a huge priority, looking really goddamn cool trumps it every time. Don’t get me wrong; I love the style of the weapons in WARMACHINE, but sometimes, when I’m writing a battle scene and I need to describe how a certain weapon works, it can be challenging from the perspective of historically accurate(ish) combat. There’s always a way to write it believably, but some weapons take a bit more inventiveness on my part. Yeah, I’m lookin’ at you, Storm Lances. On the flip side, I just love Ashlynn d’Elyse’s weapon Nemesis. It’s got all the things that make Iron Kingdoms weapons cool and it’s a totally realistic and useable sword design. No fudging required. 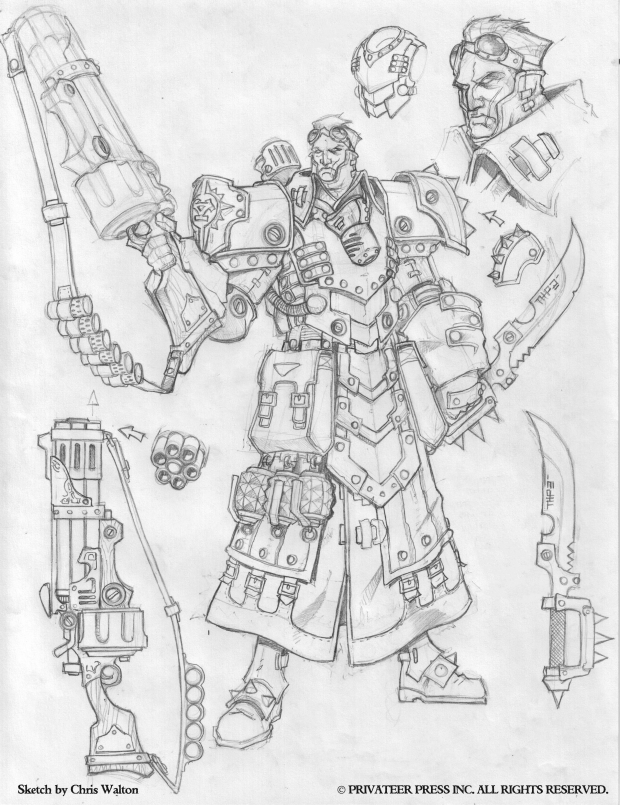 Four men and three women entered the cell, two Assault Commandos behind them, carbines at the ready. The prisoners wore little more than rags, and it was clear they had been guests of the Khadoran Empire nearly as long as he. Lucas didn’t recognize any of them until he got to the last woman in the group. His breath caught in his throat, and both fear and joy seized hold of him. Alyce. No. He had believed his wife had escaped the attack on the Resistance stronghold in Laedry where he’d been captured. Knowing she was safe was the only thing bolstering his failing sanity. It seemed even that was to be taken from him.

His captor had said nothing about Alyce in all the time Lucas had been imprisoned. Was it possible Strakhov did not know who she was? He clung to this scant hope.

“Line them up,” Strakhov said, and his commandos faced the prisoners against the far wall of the cell.

“Please don’t do this,” Lucas said, knowing what was coming. “These people aren’t involved.” He needed Strakhov to believe he had no personal stake and that he simply wanted to avoid further bloodshed.

Strakhov put his hand on the hilt of the trench sword he wore on his left hip. Lucas had seen the brutal weapon in action. It was twenty four inches of mechanika-driven steel, stout enough to puncture warjack armor. Flesh and bone would offer no resistance. “I don’t want to do this,” the warcaster said. “Tell me what I need to know and I won’t have to do this.”

What is Strakhov trying to find out? Who is Lucas and why is he in a cell? All will be revealed; I promise. In the meantime, keep checking these updates for more info on Acts of War: Aftershock.

If you have a question or a comment about the book or my writing process, ask away in the comments section below. If you’ve missed the progress reports for the previous weeks, you can find them right here:

Remember to check out the first book in this series, Acts of War: Flashpoint, at a 25% discount from the Skull Island eXpeditions website by entering the code ACTSOFWAR1 at check out.