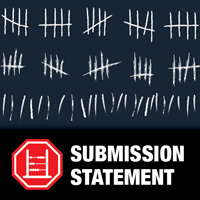 October was another solid month. Details below.

Although I didn’t send as many submissions as I would have liked, I still managed to nab a couple of acceptances. Two publications (one BIG one) and only two rejections made this a pretty excellent month. I’m at 76 total submissions for the year, which puts me behind pace for my goal of 100. I’d need 12 subs per month In November and December to pull that off. At my current rate and work load, I think I’ll end up closer to 90, and I’m fine with that.

The only rejection of note was the personal rejection. It came with some feedback that I chose to ignore, and I sold the story on the next submission. This is not to say the editors of the market that rejected the story were wrong or that their feedback was not well thought out. It was the correct feedback for their market and their editorial tastes. Had I made the changes suggested, it would have changed the central theme of the piece, and I didn’t feel that was necessary. The next editor liked the story, and a sale was made. So, the lesson here is that feedback is great, but it has to align with the story you want to tell. It’s okay and, in my opinion, vital to ignore feedback that doesn’t.

Two publications last month. The first was my baseball horror novella Effectively Wild and the second was a flash piece titled “The Death of Me” published by The Arcanist. Links to both below.

“The Death of Me”

And that was October. How was your month?