A few years ago, I wrote a novelette called “On a Black Tide” for Privateer Press, which was included in an anthology of novelettes called Rites of Passage. Privateer Press has given me permission to post an excerpt from “On a Black Tide” and to tell you that you can download the entire novelette from Amazon for free for the next five days. In addition, Rites of Passage is now available from Amazon in print. The anthology is a fantastic introduction to the steam-powered fantasy world of the Iron Kingdoms and features stories by some great authors, including Douglas Seacat, Darla Kennerud, Matthew D. Wilson, Oren Ashkenazi, William Shick, and some dude who runs a blog about rejection. 🙂

Here’s the cover and back cover text for “On a Black Tide.” 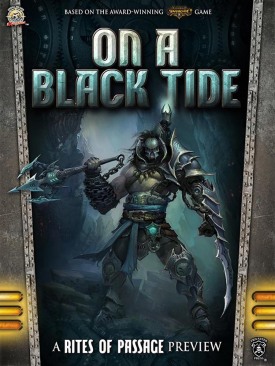 They say the waters of Cryx run black with ancient evil . . .

In the port city of Blackwater, deep in the heart of the Nightmare Empire, life is short and brutal. Murderous gangs rule the streets and surviving to adulthood means being more vicious and uncompromising than those around you. The only hope of escaping the gang-infested streets is to join one of the many pirate vessels that launch raids from Cryx against the mainland.

For Aiakos, a strong yet undisciplined street thug, the opportunity to join the pirate ship Scythe in a trial by combat is the chance of a lifetime. But as he soon discovers, fighting his way onto a Cryxian pirate vessel is only the beginning of the bloodshed.

When the Scythe is drawn into the schemes of the powerful Satyxis Admiral Axiara Wraithbane, Aiakos once again has a chance to improve his station . . . or die trying.

The novelette “On a Black Tide” is a preview of Rites of Passage, a novel-length collection featuring five additional tales about the grueling trials of novice warcasters in the Iron Kingdoms.

Aiakos watched the Scythe limp into port like a great, wounded beast. The thick ironwood planks of its hull were shot through in many places, and the ship sat low—too low—in the water. Its main mast was gone; only a cracked six-foot stub remained where the massive beam had once stood proud and straight. Rigging and torn sails lay in a tangled snarl on the decks. The ropes had soaked up blood leaking from dozens of broken bodies, turning them pink so they looked like great heaps of intestines. The paddle wheel and the steam engines that powered it were intact; otherwise, Aiakos surmised, the Scythe would be at the bottom of the Meredius.

“That’s Bloodbrine’s ship,” Dasko said, pointing his dirk at the lumbering pirate galleon. “Shot to hell and gone, looks like.”

Aiakos nodded. “Just like Baros said. He’s headed for our pier.” He took a few steps down the pier as the Scythe came to a stop and the few men on her deck cast hawsers to waiting sailors on the pier. Once the ship was moored, its surviving crew shuffked down the gangplank. Every one of them bore some injury, mostly deep cuts and bullet wounds, the mark of pistol and cutlass.

“That he is,” Dasko said. “Baros had good information. That’ll earn him a few more coins.”

Aiakos glanced back at the gang leader, who was now worrying a bit of meat from his teeth with the point of his knife. Behind Dasko twenty of their best lads waited, clubs and knives in hand. He and Dasko had run the Quay Slayers for the last five years. They’d both joined the gang as a means of survival. Aiakos had been forced onto the brutal streets of Blackwater at eleven, Dasko at twelve. This was the way of things in Cryx. Once a child was deemed old enough, he was forced to fend for himself. The only real way to avoid death was to join one of the countless street gangs and learn to be as vicious and cruel as everything else in Blackwater.

What remained of the Scythe’s crew had now disembarked, and the captain himself, Grivus Bloodbrine, was making his way down the gangplank. Captain Bloodbrine was tall, gaunt, and hollow-cheeked. His clothes, although of fine make, were spattered with blood and scorched, and he cradled one arm against his chest, bloody bandages shrouding the limb completely.

Aiakos made his way down the pier, pushing through the line of injured sailors leaving the Scythe. Bloodbrine saw him coming and put his good hand on the heavy pistol shoved into his belt. This was how most people greeted Aiakos—with suspicion and an expectation of violence. Aiakos was large and strong, and he’d earned a reputation as a formidable fighter: relentless, uncompromising, and brutally skilled. He approached the captain slowly, his own weapons—a whaler’s harpoon balanced over one shoulder and a long flensing knife at his hip—at the ready but not overtly so.

“And who might you be?” Captain Bloodbrine called out.

“I am Aiakos, second in the Quay Slayers. You’re moored on our pier, Captain.”

Bloodbrine smiled. “Is that so?”

“It is,” Aiakos said. “But your ship is in bad shape, so we’re willing to let you remain here and offer our protection.”

“What would I need protecting from?” Bloodbrine asked, tapping the butt of his pistol with one finger. Behind the captain another member of his crew had come down the gangplank. She wore closefitting leathers and carried a brace of pistols across her chest. She held a gaff pole in both hands, its blade hooked and gleaming. Unlike the other members of the Scythe’s crew, this woman bore only superficial signs of combat—torn clothing and a few scrapes. The fact that she was uninjured meant either she’d avoided the fighting or she was very good at it. By the way she carried herself, Aiakos assumed the latter.

“Aiakos here says we’re on his pier, Nyra,” Bloodbrine said as the woman came up beside him. “What do you think of that?”

Nyra stared at Aiakos with cold, appraising eyes, her face unreadable. “Pay him what he wants. Someone has to watch the ship while repairs are made,” she said, then pushed past Aiakos.

“My first mate says pay you,” Bloodbrine said. His smile soured. “But what if I’ve got twenty fighters waiting in the hold to protect what’s mine?”

Aiakos glanced up at the decks of the Scythe and quickly counted thirty bodies; there were likely more in the hold. Bloodbrine was in a bad position and vulnerable. The pirate captains were certainly a notch up on the food chain over the street gangs, but any wounded beast was likely to attract scavengers. Aiakos took the risk, weighing his words carefully to imply the threat. “You don’t, or some of them would be with you now. We’ll make sure the shipwrights do their work without interruption while you fill out your crew.”

Bloodbrine grimaced and then spat. He knew his vulnerability was obvious, and in Blackwater that meant he was prey. “How much?”

Bloodbrine shook his head and dug into one of the pouches hanging from his belt. He pulled out a handful of gold coins and shoved them at Aiakos, who dropped them into his own pouch.

“Good,” Aiakos said. “Have someone here with the next payment tomorrow at the same time.”

“Do you think you could keep them off the ship?” Bloodbrine nodded at something over Aiakos’ right shoulder. He turned and saw a trio of awful figures moving down the pier. The necrotechs were bulbous, fleshy things upon a tangle of metal spider-like legs. They moved toward the Scythe, a small mob of shambling thralls in their wake. The undead masters of necromechanika were always on the lookout for fresh supplies. Word had obviously reached them that the Scythe was, for the moment, a floating abattoir.

Aiakos suppressed a shudder as the necrotechs approached. The undead were part of everyday life in Blackwater, but most of the living stayed out of their way lest they, too, be considered raw materials for the flesh foundries. Some in Blackwater saw undeath as a way to accumulate power and rise in station; certainly the armies and navies of Cryx contained powerful undead, not to mention the almost god-like power of the lich lords who controlled everything. To Aiakos, though, the thought of surrendering breath and blood for the cold eternity of undeath was abhorrent. Worse yet was that many were thrust upon that path unwillingly, robbed of their free will to serve as mindless and disposable cannon fodder.

“No,” Aiakos said and stepped out the way of the necrotechs and their thrall servitors. The rotten stink of their passing made his eyes water and his gorge rise. “They always take what they want.”

Bloodbrine watched the necrotechs clamber aboard his ship, their spidery legs making a dull metallic clacking noise as they scuttled across the main deck. “The shipwrights will be here tomorrow, after they’ve”—he jerked his head toward his ship—“taken what they want.”

Thralls had already begun to drag the dead from the Scythe, leaving bloody smears across the pier. Many of the corpses were in various states of dismemberment, as the necrotechs cut away the burnt and mangled pieces, leaving the choicest bits intact.

Aiakos nodded, then turned and walked back to Dasko. Bloodbrine remained, watching the necrotechs with a scowl. Aiakos felt a twinge of sympathy for the captain, a well-known and powerful pirate now forced to stand by and watch the real power in Blackwater take what it wanted from him.

“What did he say?” Dasko said as Aiakos approached.

Dasko smiled and rubbed his hands together. “The lads were hoping for a bit of sport, but I’d just as soon have the money without a fuss. Hand it over.”

Aiakos dug the coins from his pouch, counted out his cut, and passed the rest to Dasko without a word.

“We talked to a few of Bloodbrine’s men as they passed,” Dasko said. “He’ll be looking for replacements. They’re gathering at the Black Hold. Should be quite a spectacle.”

Pirate captains looking to replace men lost in battle often announced their intentions and gathered potential recruits into one of the many fighting pits around Blackwater. There, the poor and desperate would fight one another, sometimes to the death, for a chance at a life at sea. Crewing a pirate vessel was not exactly easy work, but the chance to get off Blackwater and at least have the opportunity to amass wealth and prestige was often considered enough to die for.

Aiakos was no stranger to the fighting pits. He fought regularly, both to earn extra coin and to keep his battle skills honed. His many victories only enhanced his reputation among the Quay Slayers and the rival gangs they often battled. “I’ll meet you there,” Aiakos said and walked past Dasko. He turned and looked at the Scythe. The ship was swarming with activity as more thralls arrived to cart away the dead. Beyond the ship was the Meredius, its waters stretching to the horizon in a flat, grey expanse. To Aiakos the sea looked like a blank slate, pure and filled with untold possibilities. He turned back to Blackwater, grimaced, and pressed on.

If you’d like to read the rest of the story, you can download “On a Black Tide” from Amazon absolutely free for the next five days. And if you dig my little tale of piracy, undead, and general mayhem, you should absolutely check out the other five stories in Rites of Passage, also available in eBook and print formats from Amazon.