My Merciless Masters at No Quarter Magazine

As some of you may know, I do a lot of work for Privateer Press, a tabletop gaming company responsible for the award-winning fantasy miniature games WARMACHINE and HORDES. Privateer is also my former employer, and one my positions there was editor-in-chief of their in-house magazine No Quarter. The magazine is now in the very able hands of my former colleague Lyle Lowery, and, since he’s such a nice guy, he lets me write for the magazine on a pretty regular basis.

The most recent issue of No Quarter features an article of mine called “Guts & Gears: Blind Walker.” The Guts & Gears series is kind of like an encyclopedia entry for the strange and terrible monsters and machines that inhabit the Iron Kingdoms, the setting for the WARMACHINE and HORDES games. The one I wrote for this issue is about a giant, bipedal gator monster augmented by terrible necromantic rituals to serve its reptilian masters. Here are the covers of the last two issues I worked on (including the most recent). 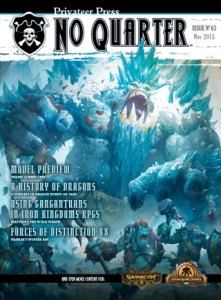 For over ten years No Quarter magazine has provided the Privateer Press community with a wealth of informative articles, top-notch fiction, and sneak previews into upcoming developments in Privateer’s many award-winning games. The magazine, of course, holds special significance for me since I guided its course for three years. It was one of the most rewarding and challenging jobs I’ve held. One of these days I’ll write about my experiences running No Quarter. The uncompromising schedule of a magazine is a terrifying but educational experience for anyone who wants to work in a creative field.