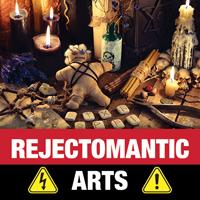 It’s been a while since I posted a new Rejection Letter Rundown, mostly because I’ve covered just about every kind of rejection you can get. That said, there’s always something new in submission land. 🙂 So this time we’re discussing a rejection letter sans, uh, letter. Yep, there are times you know you’ve been rejected without any kind of formal notice from the publisher. No letter, no auto-generated response from a submission manager, just meaningful silence. Let’s call it the unspoken rejection (though implicit rejection works too). In my experience, this kind of rejection is expected in certain situations. Other times it might take some sleuthing to figure out that’s what’s happened. Anyway, let’s take a look three situations where I’ve received unspoken rejections in my career.

Contests are the most common scenario where I don’t expect to receive an unspoken rejection. In fact, the publisher often lets you know that’s what’s going to happen in the guidelines, like this:

Because of the volume of submissions we anticipate, there will be no rejection letters. When you submit, you’ll be given a receipt of the transaction. All winners will be contacted by October 1st. If you have a problem, feel free to reach out by email, but we won’t be giving status updates like we normally would.

In the above situation, if I don’t find my name on the winner’s list, I know to go out to Duotrope and record the submission as a rejection. I don’t mind at all when a publisher handles rejections like this. If I know up front that’s how it’s gonna be, it’s really no different than getting a form rejection. Record and move on.

There are times when I’m not certain but still pretty sure no rejection will be sent if a publisher passes on my story. Most often this is an anthology with a limited, but clearly stated number of open slots. Helpfully, sometimes the publisher will keep a running count on their website of the number of spots remaining. When all spots are filled, and, you know, you haven’t filled one, you know you’ve been rejected. Most publishers come right out and say that on their website and/or on social media once they’ve selected all the stories they need. A few might not, but there’s enough information to make a decision and record that submission as a rejection.

The rarest of unspoken rejections (and I’ve only run into it once, a long time ago) is when you submit a story to an anthology that has not stated how many stories will be published nor addressed how rejections will be handled in the guidelines. You only find out you’ve been rejected (months later) because the anthology is published and, uh, your name isn’t in the table of contents.

Look, I don’t expect every story I send to be published. Hell, I don’t expect the vast majority of the stories I submit to be published. I do, however, expect a publisher to let me know, in some fashion, that my story hasn’t been accepted. Otherwise, it keeps me from submitting the story elsewhere, especially to markets that don’t accept simsubs. If an actual rejection letter isn’t possible, then all I want is a quick announcement via social media or on the publisher’s website letting folks know the anthology is full and anyone who hasn’t been contacted should consider their stories rejected. I don’t think that’s too much to ask.

Do you have any experience with the unspoken rejection? Tell me about it in the comments.