Ranks of the Rejected: Orrin Grey 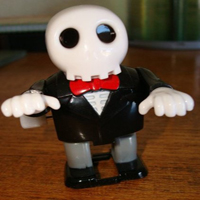 Welcome to the first installment of Ranks of the Rejected, where I interview working authors and ask them to bare their literary wounds to the cruel, cruel world for your amusement and edification. Since these authors are putting their rejection out there for you to gawk at, be a pal, check out their books, blogs, and websites—they’re all definitely worth a look.

First up is Orrin Grey, an accomplished author of spine-tingling horror and the macabre. I’ve worked with Orrin a number of times in my previous role as acquisitions editor at Skull Island eXpeditions, where he wrote an excellent novella called Mutagenesis and numerous short stories. He’s a consummate pro, a hell of a writer, and a 13th level Rejectomancer who has unlocked the mystical abilities Power Word: Revise and Enthrall Editor. Here’s a bit more about Orrin:

Orrin Grey is a writer, editor, amateur film scholar, and monster expert who was born on the night before Halloween. His stories of monsters, ghosts, and sometimes the ghosts of monsters have appeared in dozens of anthologies, including Ellen Datlow’s Best Horror of the Year, and been gathered into two collections, Never Bet the Devil & Other Warnings (out now) and Painted Monsters & Other Strange Beasts (due out in October from Word Horde). He has also co-edited Fungi, an anthology of weird fungal stories, with Silvia Moreno-Garcia, and he occasionally writes licensed fiction and other odds-and-ends for Privateer Press. You can visit him at orringrey.com or throw money at his Patreon to get behind-the-scenes access to his creative process, such as it is.

1. That first rejection letter is pretty memorable (i.e., it is burned into your cerebral cortex for all eternity). Tell us what you remember about your first.

I have to admit, I don’t think I actually do remember my first rejection letter. It was longer ago than I may care to admit, and there have been an awful lot of them since. From back in the days when we actually sent out physical submissions via snail mail and got actual rejection letters on actual pieces of paper, I kept all my rejections, and the earliest one I could find was a form letter from Weird Tales back in 2003, which doesn’t really stick in my memory, but certainly tells you where my first impulses were when it came to where I wanted to be published. I’ve still never been published in Weird Tales, except for an interview I did with them one time.

2. What do you hope to see in a rejection letter? You know, beyond the soul-crushing doubt and disappointment. What’s useful to you as a writer?

Honestly, if I’m getting a non-form letter, it’s nice when they let me know what didn’t work. Sometimes it really is a case of “this just didn’t fit our needs,” but other times it may be something more specific. I recently got a rejection letter where the editor told me that he liked the second half of the story more than the first. I took another look at it, and, what do you know, I liked the second half more, too, so I ended up rewriting it and pretty much cutting the first half out entirely, and I think it’s a better story for it. That said, my favorite thing I have ever seen a rejection letter do is to go ahead and put “REJECTION” right in the subject line of the email, just like you often have to put “SUBMISSION” in front of your name or the title of the story or whatever. That lets you know what you’re in for as soon as you see it pop up in your inbox and spares you both that moment of heart-in-your-throat hope and that crushing moment of realization after you read the first sentence or so and get to the dreaded “we are unable to publish.”

I don’t know that I remember a single, specific favorite rejection, either, but I know where I most enjoyed getting rejections from. Back in the day, when I was first getting started in this business, I distinctly remember a former editor at Clarkesworld. Even then, Clarkesworld paid great rates and had an incredibly quick turnaround time, so probably half the stuff I wrote went there before it got sent anyplace else. This editor’s rejections were always personal, vicious, specific, and extensive. I’d frequently get several paragraphs back from just about anything I sent him, often within a day or two of sending it out. There was a joke among some of my writing friends that you didn’t need a workshop or a writing group when you could just send your story to Clarkesworld and get it critiqued for free.

4. What’s the toughest part of rejection for you? Pro tips for dealing with it?

I think it might vary a bit from story to story and rejection to rejection, but I think the thing that helped me the most in dealing with rejections was actually getting to work on the other side a little bit. When I was co-editing Fungi with Silvia Moreno-Garcia, I got to see first-hand how the acceptance/rejection process works from the editorial end, and I learned valuable stuff like that you really do get way more great stories than you can possibly use, and often that tired old phrase from the form letters that “it doesn’t match our needs at this time” is absolutely true. Sometimes you have to reject a really great story because it doesn’t fit into the anthology as it’s shaping up, because it’s too similar to a story that you already bought, and so on. That made it easier to take any rejections I get in stride, and to not take them personally.

5. Okay, tell us about your first or your most recent acceptance letter?

My first acceptance letter I do remember. It was for a tiny (both literally and figuratively) little magazine called Thirteen Stories, and my story appeared in what turned out to be that publication’s final issue, where I shared a table of contents with some other up-and-coming writers of the genre, including a really good story by Gary Fry. Don’t bother looking up my story from there, though. It’s really better off forgotten.

6) Okay, plug away. Tells us about your latest project or book and why we should run out and buy it.
My latest book is Painted Monsters & Other Strange Beasts, which is available from Word Horde. It’s my second collection, featuring a lot of the stories that I wrote since my previous collection came out, but it also comes complete with an honest-to-god theme! The title comes from the 1968 Peter Bodganovich film Targets, in which an aging Boris Karloff basically playing himself says, “My kind of horror is not horror anymore. No one’s afraid of a painted monster.” That line, along with the rest of the movie, felt so much like a summation of the way that horror films were changing in the 60s that I knew immediately I wanted to use it as the epigram of my second collection. So when I was putting Painted Monsters together, I was thinking about the way that movies influenced my writing, and about the ways that horror films had changed over the years, and so the collection became a sort of exploration of the changing face of horror, with the earliest stories inspired by silent films and the monster movies of the 1930s, moving up through Italian Giallo flicks, kaiju movies, and found footage. Plus, Painted Monsters contains my ghost apocalypse story “Persistence of Vision,” which was selected for Ellen Datlow’s Best Horror of the Year, so you know there’s at least one good story in there!