How Long Does It Take to Write a First Draft?

How long does it take to write the first draft of a novel? Well, that’s going to be pretty subjective, and I’m only going to answer as it relates to me. This post will be how long it takes me to write a first draft. It is absolutely not a judgment of how long it takes you to write a first draft. Every author has their own system, timetable, and workflow that allows them to get from point A to point B. Keep that in mind as you read on.

With that disclaimer out of the way, let’s talk about the novels I’ve written and how long it took me to knock out that first draft. First, a bit about my process. I am a dedicated plotter, and the first thing I write is a thirty chapter outline broken into three acts, ten chapters each. That document runs between five and eight thousand words. When it’s complete, I have someone look it over. In the case of the media tie-in novels at Privateer Press, that’ll be an editor and likely Matthew D. Wilson (the owner and chief creative officer of Privateer). I’ll get notes on the outline, make changes, resubmit, and at some point I’ll have an approved document I can start writing from. My own novels go through a similar process, in that I have one my critique partners look over the outline and make suggestions before I start writing.

Once I have my outline, I create a simple writing schedule. It’s just a spreadsheet where I plan out my daily word count goals, fill in how much I actually write in a given day, and add a few other numbers I like to see. Here’s what that looks like. 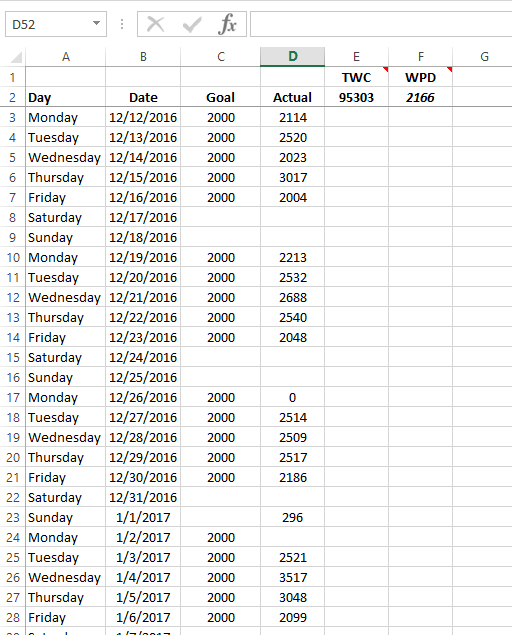 The image above is a piece of my writing spreadsheet for the novel Acts of War: Aftershock. It’s pretty straightforward. You have the day and date, the word count goal for the day (2,000 words), what I actually wrote that day, and then a running tally of total word count (TWC) and how many words I average per writing day. You’ll notice I shoot for a five-day-a-week writing schedule and 10,000 words for the week. I will write a bit on the weekend if necessary, as you see on Sunday, January 1st (and you’d see more of that further down) so I can hit my 10,000-word goal (or a bit more) for the week. I find this to be a manageable and even comfortable pace.

Okay, now let’s talk about the first drafts themselves. Since I left my full-time gig at Privateer Press in 2015, I have written five novels, three published and two unpublished. I’m only going to give you the details on four of them because one of them was written episodically and is outside my usual process. Also, because one of these novels is semi-secret, I’m just going to call it Novel X. Here are the basic numbers for the four books.

Okay, so we have the start and end date for each first draft, which is pretty self-explanatory. Then we have total writing days, which is the number of days the first draft hung over my head like the sword of Damocles, even on the days I wasn’t specifically working on it. Next is writing days, the actual number of days I put words on the page. Total word count is next. No need for further explanation there. Finally, we have WPWD, which stands for Word Per Writing Day. That’s how many words I managed, on average, on the days I worked on the novel.

You’ll notice my WPWD is pretty consistent, and I will generally bang out at least 2,000 words when I’m working. Of course, some questions might arise from this chart as well. For one, why did Novel X and Late Risers take longer than the two Acts of War novels. Well, Novel X was the first big novel I wrote (and maybe over wrote), so there was a pretty steep learning curve there. It took me a little while to get me sea legs, as it were. Late Risers, which is my own IP, took longer because, well, it was harder to write, and I found myself taking breaks from the book for a couple days at a time that led to a lengthier time table. It’s currently still in revision, or well, it will be when I figure out what needs to be done with it.

You might wonder why there’s a discrepancy between total days and actual days. I mean, why am I not working on the novel every single day? The answer is simply I need to work on other projects, and sometimes I need time away from the BIG project to recharge, puzzle out plot issues, and so on. Still, I think I’m knocking out first drafts at a decent clip. At the rate I’m going, I could write two novels a year pretty comfortably. (Yeah, I know. Maybe I should do that.)

So we have a range of between two to four months for the first draft of a novel. I think, for me, that’s a pretty good sample of how long it takes me to write a first draft. The one that go smoothly can be done in a couple of months. The ones that go, uh, less smoothly, take a month or two longer. As I said at the beginning of this post, this is all specific to the way I do things. It’s not the right way or the best way, but it’s the way that works for me. If some of this works for you, please take it and use it with my blessing.

Yesterday, I started a new novel, following all the steps above. I have my outline, my writing schedule, and I managed to complete the first day of writing and hit my 2,000-word goal. How long will this one take me? Well, I’m shooting for two months, but if it takes three, that’s okay too.

Of course, nothing in this post references what happens after I finish a first draft. You know, the dreaded editing stage. That one’s a little harder to pin down, but I might talk about that process in another post. In the meantime, how do you go about writing your first drafts? I’d love to hear about it in the comments.

← Micromanagement II: 4 MORE Benefits of Writing Tiny
50 Published Stories: What Have I Learned? →

2 Comments on “How Long Does It Take to Write a First Draft?”