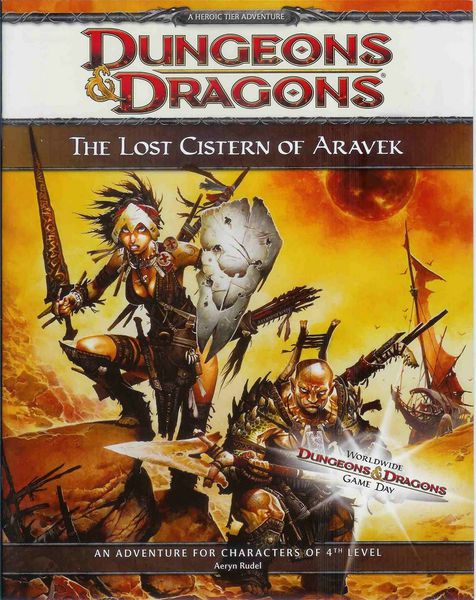 In this week’s installment of Aeryn Archives we journey to the scorched world of Athas and the first Dark Sun adventure I wrote for 4th edition Dungeons & Dragons, “The Lost Cistern of Aravek”. I’ve been a fan of this particular campaign setting for twenty-five years and the chance to write official material for it is one of the highlights of my tabletop RPG career.

So what is Dark Sun and why is it cool? Way back in 1991, TSR, the owners of Dungeons & Dragons at the time, were releasing scads of campaign settings, boxed worlds with various flavors you could set your D&D game in. One of those campaign settings took place on the scorched, post-apocalyptic planet of Athas, a brutal desert world where metal was scarce, water scarcer, and everyone and everything was out to kill (and usually eat) you. It was a huge departure from the standard fantasy settings that had come before it both in tone and lethality, and I fell head-over-heels in love with it.

Fast forward to 2010. I’d been working with Wizards of the Coast as a freelance game designer, and I’d written a handful of adventures and articles for Dungeon and Dragon magazines. One day, in February of that year, I got an email from Chris Perkins, then Creative Manager for Dungeons & Dragons at Wizards of the Coast. (Chris is still there, by the way, and still doing all kinds of cool stuff with D&D). In the email, Chris said he’d been talking to Chris Youngs, who ran D&D Insider, and whom I’d been working with for Dungeon and Dragon articles. My name came up as a possible fit for a freelance assignment that would be part of the 4E launch of the Dark Sun campaign setting. Chris Perkins offered me the assignment, and, well, I was over the fucking moon. I mean, the chance to work on Dark Sun, the campaign setting I’d loved for 20 years? Yes, please!

The assignment was to write a short 16-page Dark Sun adventure which would be released as part of D&D Game Day, an annual promotional event where WotC supplied game stores with a special adventure and pre-generated characters to run in-store. Chris Perkins gave me the basic details for what they wanted and then let me come up with a story outline. The idea I came up with was fairly simple and focused on one of the main problems players face in Dark Sun: water scarcity. Essentially, the players are hired to track down some ancient wind-trap technology that could solve a lot of the water issues in the area. Of course, this is Dark Sun, so that technology is guarded by terrible monsters, coveted by merciless brigands, and generally incredibly damn dangerous to find, But, hey, that’s what makes it fun! Long story short, I wrote the outline based around the premise above, it was approved with a few tweaks, and then I wrote the adventure that became “The Lost Cistern of Aravek.” It would be the first of two Dark Sun adventures I would write. The other, “The Vault of Darom Madar,” was released in an issue of Dungeon magazine (we’ll cover that one too at some point).

You’ll notice I’m not providing a link so you can go buy this adventure. That’s because “The Lost Cistern of Aravek” was a Game Day adventure and a special giveaway, so it was never for sale and as a result it’s kind of rare. I see it go for around seventy-five bucks on Ebay from time to time. That’s pretty neat, and I’m so glad I held on to my authors copies (still in the shrinkwrap). 🙂

← The Tiny Adventures of Lucky & Sal
The Way I Write Part 2: Evolution →

One Comment on “Aeryn’s Archives: The Lost Cistern of Aravek”