My story “Caroline” was just published in Red Sun Magazine #3, and it’s the cover story. The you can check out that cover below by the incredibly talented Mitchell Malloy. The piece perfectly captures a scene from “Caroline,” not to mention the overall tone of the story. Also in this issue, Red Sun horror editor Phillip Englund interviews me in a vain attempt to discover what exactly is wrong with my brain that makes me write such bleak and horrific tales. 🙂 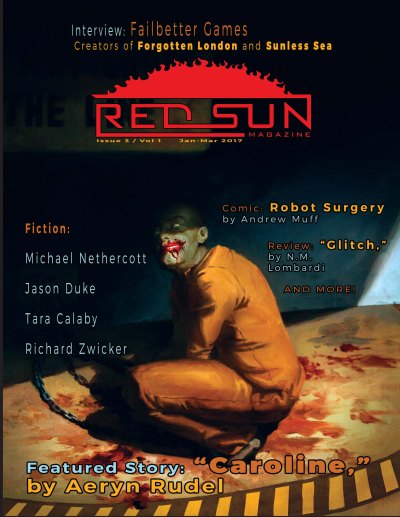 The good folks at Red Sun have also given me permission to publish the first 500 words of “Caroline” right here on my blog to whet your appetite for the rest of the story, not to mention the other great stories that are offered up in issue #3.

An Excerpt from “Caroline” from Red Sun Magazine #3

“Can I go to the basement to see Daddy?” Caroline said.

Barbara set the shotgun on the kitchen counter, made sure the safety was on, and knelt down to her daughter. “No, honey. Daddy isn’t ready for visitors yet.”

“When he finishes his lessons?” Caroline asked, hopeful. She and David had been very close, and Barbara knew she felt the loss more deeply than her twelve-year-old brother. Mark wanted nothing to do with his father.

“Maybe, but that might be a long time from now.” She pulled her daughter close, and Caroline melted into the embrace. After a few moments, Barbara gently pushed Caroline away. It took real effort to let her go. “Now go outside with your brother and Uncle Robert. I’ll call for you when I come back upstairs.” It was just too dangerous to have the kids in the house during rehab.

Barbara smiled. “I know you could, but remember what the people from the Rehabilitation Agency said. Just one of us right now, until he gets a little better.” Caroline was so smart, and she was fascinated by the rehab process, questioning Barbara on every detail. Barbara didn’t tell her daughter much–most of it wasn’t fit for an eight-year-old to hear, and the rest . . . She wouldn’t dash Caroline’s hopes like that.

“Please, Mom. I miss him so much.” Tears stood in her pale green eyes. Green like her father’s used to be.

“Go on, honey. Now,” Barbara said. It was a knife in her heart to see Caroline like this.

Caroline shuffled to the sliding glass door, opened it, and stepped out into the backyard. Her brother and her uncle were waiting for her. Robert looked a lot like David; he was three years younger, though his hair had started to gray at the temples. Stress, probably. She watched him scoop up Caroline, saw her come alive in his arms, smiling and laughing as he spun her around. Mark walked up behind them. He was smiling, too. They all looked happy. Despite the terrible thing that had happened, her family looked happy.

She watched Robert and her children for a few moments, trying to soak in as much of their joy as possible. Robert didn’t like staying outside while she was downstairs. He wanted to be with her if things got bad, but she wouldn’t allow it. She needed him to stay with Mark and Caroline. She didn’t want to worry about them while she worked with David. There was another reason, too, one she couldn’t tell him. Robert had become the bedrock upon which they were rebuilding their lives. She couldn’t risk him getting hurt, or worse. She remained devoted to her husband, but if David couldn’t come all the way back . . . She pushed the thought from her mind, guilty for even considering it. It was too soon to be thinking like that.

If you like what you’ve read, head on over to the Red Sun Magazine website and purchase issue #3 for the rest of the story, plus a whole bunch of other goodies.